Do you find that you spend a lot of time in the garden, employ sweat equity and spend $$$ for a $500 tomato?   You don’t have to do that anymore.

Did you know: You can buy one Garden Anywhere Box-GAB ($60) and one bag of potting mix ($15) for a total cost of $75. The GAB and the potting mix can be used year after year. Let’s say that your GAB and Potting mix last five years. Suppose you plant two tomato plants ($3-or seeds which would be way cheaper) in your GAB. Your initial investment would then cost you $15 a year (plus plants minus the $$$ that you would spend to buy tomatoes)  to grow yummy, delicious, homegrown tomatoes. What if your boxes and potting mix lasted ten years or more which is probable. That would be $75 divided by 10 for a cost of $7.50 per year to grow LOTS of tomatoes or anything else. GAB is also portable. This allows you to move your boxes inside during the winter and garden year ’round. 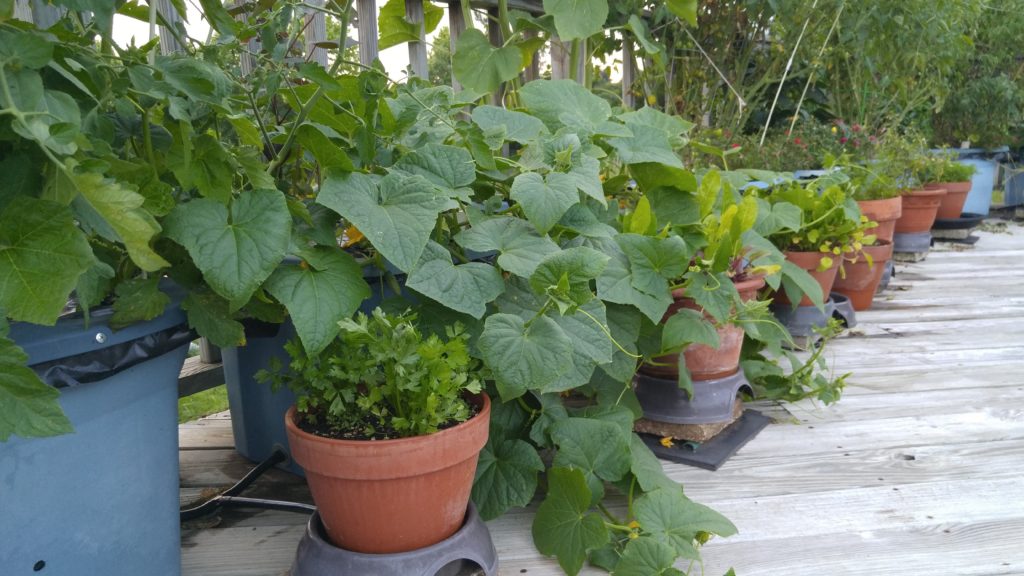 Our boxes are going on ten years, so this is a realistic goal. We think they should last 10 years or longer.
Let’s suppose that you like your GAB and want to expand your garden. You decide to buy a 3 box system ($199-this includes three GAB’s, the watering system, fertilizer and dolomite) plus 3 bags of potting mix ($45 or less) for the cost of $241 plus the $75 that you’ve already invested for a total cost of $316 divided by 10 years equals $31.60 per year for a No weeding, Automatically-Watering and Portable garden. Now you have four GAB’s and a watering system. You have four boxes that you can grow yummy, delicious, home-grown tomatoes, or peppers, cucumbers, squash or anything that your heart desires. You also have a watering system that you can hook up to a rain barrel or outdoor faucet  and water your garden automatically.  You can go away for a week at a time and your garden will be watered while you are gone.  You can garden all year ’round..winter, spring, summer and fall. Too good to be true? No, it’s a reality with Garden Anywhere Box.

You can expand your garden each year adding as many boxes as you want. You only need one watering system to water your garden. As long as your garden is on a level surface, you can add as many boxes as you want and your GAB garden will be watered automatically. This will be the tenth year that we’ve been gardening in containers, but only the fifth year since we invented our watering system and started Garden Anywhere Box.  Each year our garden has gotten bigger at a minimal cost compared to the food that we harvest.

Another cool thing about GAB is that you don’t need to know anything about gardening to be successful. If you can fill a box and plant a plant, you can garden in GAB. As time goes by, you will learn more and want to grow more. You will learn along the way.  When you see how easy it is to garden in GAB, you will want to try new things. You will fall in love with how easy it is to be a successful GAB gardener.

Like I said, you can use the same potting mix year after year. Every few years, dump the potting mix on a tarp in the sun for 2-3 days between planting cycles. This allows the potting mix to aerate and sterilize as the sun removes unwanted bacteria/fungi, etc. It is fine to dump the potting mix in one big pile. After it is mixed, aerated and dried, put your potting mix back into your GAB’s. Put a new strip of fertilizer length-wise down the box and if you are planting many different nightshades (tomatoes, peppers, egg-plant) you should renew the dolomite regularly to avoid blossom end rot. Add new plastic to your GAB to keep weeds out and moisture in. Secure the lid and you are ready for a new growing season.

Compare GAB to the cost of a garden in the ground. You’ve got to have a place to grow a garden. You need good soil or amendments to the soil, rototiller (helpful) shovels, rakes, hoes, trowels and other assorted helpful tools to ready the ground and remove weeds. If you opt for raised beds, you have the cost of the materials to build raised beds, soil to fill the beds and other costs like irrigation if you go that route.

Once you get the ground ready,it’s time to plant. Make your rows. Plant your seeds. Hope that a big rain does not come to wash away all of your hard work or that a freeze does not come to freeze all of your baby plants. How do I know this? That has been our experience over the years. We’ve been married almost 34 years. Almost every year we planted a garden. As we got older, it got to be so hard to want to till and weed and plant a garden. No matter how hard we worked, we seemed to get very little yield for our effort. Not only was it the time it took to plant the garden, but then the weeds would come, even with mulch. The heat that took over about mid-July caused me not to care what was growing. It was just TOO HOT to want to go out and fight the weeds.  I had pretty much given up hope of having a garden until we started using boxes to grow a garden. Finally, success! Five years later, some modifications by Larry and Garden Anywhere Box was born.

If you are looking for a cost-effective, easier and successful way to garden, please consider Garden Anywhere Box. It has been tried and tested. It works!

Potting Mix vs. Soil  Soil is not recommended for GAB. It is too heavy and won’t wick up the water properly. Potting Mix is lighter and allows the water to wick up from the water reservoir.

Potting Soil: Contains Soil (Dirt). Potting Soil will often not give optimal results because its thickness does not allow adequate water and airflow in containers. Best Uses: Raised beds or to fill low or bald spots in your yard

Potting Mix: Contains No Soil (Dirt). It does contain a sterile mix which may contain a combination of sphagnum moss, perlite and vermiculite. Potting Mix has particles larger than soil to allow the flow of water and air in the container. Potting Mix drains well while still retaining sufficient water for plants. Best Uses: Container Plants. Can also be used to start seeds and for root cuttings.